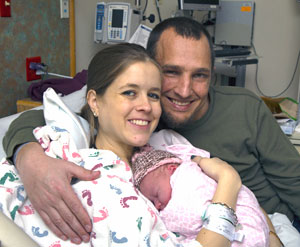 Our names are Sarah and Isaac, and this is our story:

Isaac was born with a disease called Neurofibromatosis. It is a genetic disease, where he has hundreds of tiny tumors growing all over his body, under the skin and mainly along the major nerves. He was told there was a 10% chance of any of the tumors turning malignant. When he was 29 (in 2009), the doctor found two tumors, each the size of a grapefruit, up against his hip and spine, in his groin area, that had turned cancerous. He went through two and a half months of IMRT radiation treatments, being treated for 20 minutes, 5 days a week, which would most likely leave him sterile. At the time, Isaac and I had just barely started dating - because of cost and plain old awkwardness, we chose not to freeze sperm at that time.

I myself had also been suffering from a different disease. I was diagnosed with severe anorexia and hospitalized for malnourishment and low body weight the first time when I was 12 years old. I was now 30, and had been in and out of treatment since 12. Because of all the malnutrition my body had suffered over the years, and irregular/lack of menstrual cycle, I was worried (and told by several medical professionals) that I would never be able to conceive a child, or sustain a pregnancy full term.

In 2012, now married, we wanted more than anything in the world to be able to have a child, so we went to see a fertility specialist. There were several potential obstacles: 1.) Isaac's Fertility status after radiation treatments, 2.) The likelihood that Isaac's Neurofibromatosis would be passed down, and 3.) My own ability to conceive. For me, the possibility of someday being able to have a child was the ultimate motivation to fight for recovery from my eating disorder, but we didn't have much hope since I had not had a menstrual period in 4 years (the lasting effects of malnutrition played on my body). Isaac was tested by the specialist, and his infertility was verified -- we were devastated.

But the fertility doctor did have hope. Now that I was at a healthy weight (and as long as I was able to maintain that weight), with shots and hormone treatments, he thought I should be able to conceive with a sperm donor using the IUI method. The idea of using a donor sperm took a little while to get used to, but we decided to give it a try.

I conceived on my first IUI on May 9th, 2012. I had a very smooth pregnancy, and on January 17th 2013, gave birth to an amazingly beautiful baby girl, Chloe, who was 20 inches, 7 lbs. and 8 oz. Chloe is the love of our lives, the most amazing miracle that has ever happened to us.