BACK TO SUCCESS STORIES
NEXT 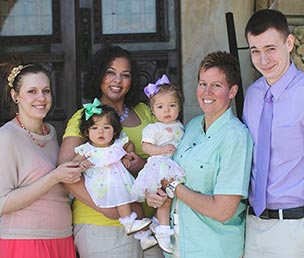 Hi! I am Janelle and my wife is Kim. We met and fell in love in 2009. We have a bit of an age difference and Kim already had two children from a previous relationship. So, ensuring we both were interested in adding to the family was a big deal for me.

In my earlier years, I had never really thought much about children. However, finding the person that you are meant to be with can set aflame the desire to share it with as many people as possible.

So, we decided that at some point, adding more children to the equation was a must. We were married in 2011 and soon began our journey to growing our family.

We had come across information from CCB several times in the past and really liked how so much information was available right online! It was so easy to pick and choose characteristics right down to what college degree the person had.

We found a Reproductive Endocrinologist and ordered our chosen guy-- Donor #12677.After 4 failed attempts, we were crushed and starting to look at other options like adoption. We were so bonded with our donor and the prospect of the child we would have that it just didn't seem worth it to consider using another donor.

After much talking, we decided we would go back through some of our old favorites and check to see if there were any new donors. We came across a guy we originally had dismissed, but decided to take a look further after being able to see what an adorable baby he was. We started to feel that familiar connection again especially since his career was in the same field as ours.

At the suggestion of our doctor, we ordered two vials of Donor #13202 and set out on our last attempt to grow our family. On November 25, 2013, we sat at home waiting on a call about the blood work to see if our latest IUI had worked. It had!

And what was even better was that our numbers were high and strong. The doctor was confident this was it and scheduled an ultrasound for 3 weeks later.

On December 16, 2013 we went in for our scan and heard the beautiful sound of our baby's heartbeat!! The doctor then paused and looked concerned or puzzled or somewhere in between. My heart dropped, please don't take this away from me, I thought. I could see my thoughts reflected in Kim's expression.

The doctor then turned to us and said, "Umm, there's two sacs!" and then we heard the second beautiful heartbeat!

In May 2014 we gave birth to beautiful, fraternal twin girls. I was only 29 weeks so we had a few more hurdles to jump before we could all be a family. However, after 2 months in the NICU, we brought home our little miracle babies.

We feel totally blessed every day and can't thank CCB and Donor #13202 enough for caring about others and their desire to build families!