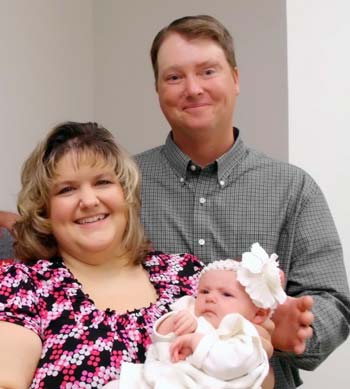 My husband Jon and I had been married for three years. I was nearing the end of nursing school when we began to discuss having a baby. Jon wanted to wait a little longer and let me get established in my job.

We had prevented pregnancy in every way possible up to this point. Later that year, after I graduated and began nursing, all methods of preventing were gone. Jon and I understood that "It may not happen right away." So our journey to try and conceive began.

After the first year of trying, I began doing research on basal body temperature, charting cervical mucus, as well as looking at lifestyle changes that might aid in fertility. Still not even a missed period. My disappointment was mounting with every month that went by. By the second year of trying to conceive, I was getting very discouraged and started thinking that one of us had an issue; disappointment, depression, and fatigue were taking a great toll on my mental status.

Toward the end of the year, we had the dreaded discussion about infertility. We discussed adoption and I explained that although I was not against adoption, I wanted to know how it felt to carry a blessed miracle within me. So we started looking for doctors, getting prices, and getting information about what we would be looking at IF we were going to make a move with fertility testing. After a number of bumps along the way, we found Dr. Goldstein. Little did I know that Dr. Goldstein had the best track record for fertility in the Dallas area. On the way home I made our first appointment.

The day finally came! We did a couple of blood tests, talked to the financial department, set up a salpingogram, and discussed what we would have to do to find out my fertility status. Two weeks later, we found out that I was fine. Dr. Goldstein then advised us to see a urologist to get Jon’s fertility tested.

Needless to say, the results were shocking! We found out that Jon doesn’t make sperm, and that it is most likely due to a severe car accident he had in his early twenties. Jon’s urologist thinks the wreck affected Jon’s pituitary gland, thus his brain doesn’t tell his testicles to make sperm. We did a trial medication for four months without success before Dr. French gave us another option. He could do a biopsy on Jon’s testicles to see if he could retrieve sperm. After discussing the procedure we decided it would be best to go in another direction.

We scheduled another appointment with Dr. Goldstein to see what would need to happen before we went forth with an IUI. He gave us an info packet that had his company's web address. Jon and I went to the website, where we found three different cryobanks that Dr. Goldstein recommended. The first website didn't work, the second one wasn't very user friendly, but the third one was California Cryobank. It was very user-friendly, from picking out physical characteristics to personality type. Plus, any time I needed assistance there was always a friendly person from California Cryobank to help out.

The day of the IUI arrived. After they defrosted the specimen, all counts came back great and with high numbers! However, the two week wait after the IUI was excruciating! Jon’s grandfather passed away and Jon had to go out of state to his funeral, so I was home by myself. Day 10 arrived, so I tested and saw two pink lines, but thought my eyes might be playing tricks on me. I waited until the next morning and took the second test – I thought I saw two pink lines again, so I went to the store and bought a digital test, then waited two more days. It came back POSITIVE! I was sooo excited! My husband called and I was bursting with joy to tell him. I wanted to wait, but ended up telling him on the phone. He arrived back in town and he took me out for a celebration dinner.

Nine months later we have our beautiful baby girl Olivia Grace-Ann. She is so precious and happy. Jon couldn’t love a child more and it does my heart good to see them together. I love my little family!

Thank you so much CCB for all you do!Laura