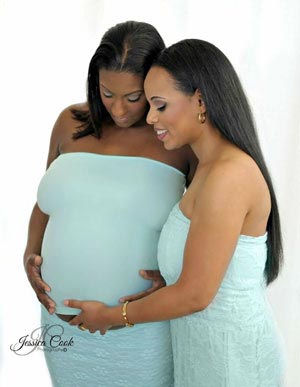 Kennedy Center, Washington D.C, July 5th 2014, was a day so beautifully clear, I can never forget. It was my first time in D.C., and I was over the moon delighted. In this moment, we were not just two women in love, we were best friends. We were ready to solidify our true love; it was today that the woman of my dreams and I finally decided, after 9 years of blissful love, that we were going to get married

After getting married, we settled in our first home together in my wife's hometown in West Virginia. As mothers to a 13 year old girl, we decided that we wanted to expand our family, and being a native of Los Angeles, CA, I googled top cryobanks in California and here in West Virginia, and that's how I discovered the California Cryobank.

After immediately deciding to go with California Cryobank, we discovered donor 13996. For our family, this donor represented our blended family well. However, the moment of happiness ended abruptly after our physician had confirmed that our chance to become pregnant had not been successful with our first attempt at intrauterine insemination (IUI) due to poor calculations - we felt defeated and heartbroken.

Almost a year passed, and we decided to try again! After countless hours browsing to pick a new donor, we found donor 14307 a.k.a. "Dancing Machine." Just as our previous donor, Dancing Machine was a perfect fit and our final choice. One unique quality he had was that he had a donor ancestry that was was from the Dominican Republic,  which is the same country my wife was from, so we were instantly enamored, excited, and optimistic!

It was only two and and half months later that we discovered we were pregnant with boy/girl fraternal twins! Our hearts were filled with pure love and warm blessings.

On October 28th, baby Amore and baby Armani welcomed themselves into the world at 37 weeks and two days. The nurses praised us on how healthy our twins were and that our twins, unlike most multiples, did not require any NICU or additional hospital stay. During our hospital stay, we were told that at many given moments, everyone called them precious or angels.

Our lives have never felt so complete and happy; we embraced the pride of success with our beautiful babies, and California Cryobank was invaluable in this process. Today, our twins are beautiful, healthy, and are at the center of our love and joy. Our future is definitely with California Cryobank, and we can not wait to start this journey again with them.